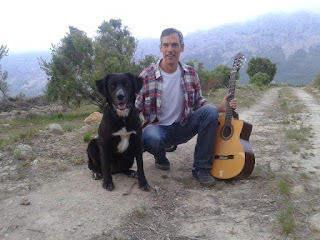 My spiritual search, for not knowing what else to call it, began in the year 1986. In my previous book titled What Happens When You Let God, I shared;

"After being sick and tired of the way my life was going, even after twenty years of studying with every spiritual teacher, coach, minister, shaman, healer, guru, expert, seminar leader and trainer that crossed my path, on November 2007 I did something I never imagined I would ever do. I took every single book, tape, DVD, CD, everything I owned in the area of human, business and spiritual development, and I am talking from spirituality, religion, metaphysics to business, positive thinking, goal-setting, success and everything else in between, put everything I owned in two big boxes and gave it all to the Salvation Army. I literally gave away thousands and thousands and thousands of dollars worth of information.
On that day is when my real commitment to my spiritual growth happened. That is when I started to truly let go and let God. From that space, I was led to the teachings of A Course in Miracles."

Before continuing, with what I have just shared, I am not implying that the paths through which life led me have been "incorrect" or "wrong." Whatever has taken place, and continues to take place in my experience, has been, and is perfectly orchestrated by Consciousness itself to take me to where I am right now. That being the case, what I feel is pure gratitude for each and every one of the experiences, resources and paths that I have felt inspired to transit.

Communicating, something that comes very natural to me, led me to share what I was learning from A Course in Miracles through writings that I periodically posted on social networks as well as comments to questions that people would ask me about the Course. I have never considered myself a "teacher" or a "facilitator" of the Course. I am only a student.

When in 2007 my life collapsed again, finding myself without work, except for job that would appeared sporadically, without even knowing what to with my life, sharing what I was learning and integrating of A course of miracles, a chain of "casual" events , so to speak, began to take place.

At the end of 2009 I met a person from Spain with whom, after sharing on Skype for a while, came the idea of ​​visiting that country and talking about the Course with some study groups there. Although I did not have the money to afford the airfare at that time, everything settled in a very synchronistic way so that he could finally go.

Returning from that little tour, I felt inspired to translate my book into Spanish, as well as create a website in Spanish. In April of that same year, I was forced to declare bankruptcy for the second time, in order to lighten the weight of the constant telephone calls of the creditors, that no matter how much I tried to pay them, I did not generate enough resources for it.

Simultaneously, people in the Spanish-speaking community began to identify with the way I shared the teachings of A Course in Miracles. At the end of that same year I was offered an invitation to visit Mexico City and give a talk. That visit that was only going to take place in Mexico City, ended up becoming a small tour including cities like Guadalajara, Culiacán, Cocoyoc, Hermosillo, and others.

When I returned, after deducting expenses, I had generated enough income so that, for the first time, I could pay rent to the owner of the house where I had been staying for the previous year, as well as to pay the person who bought my airfare to Spain, just as I had promised.

The curious thing is that, from my first visit to Mexico until today, August 2018, all my income has been generated as a result of talks and events that have taken place by invitation. In my second book, What Happened After Letting God, I briefly share a little more about my experience as well as the learning that has taken place during those years.

After a theoretical understanding, as well as lived experiences, life has led me to a deeper understanding of the teachings of A Course in Miracles, so I began to realize that my previous book had to be updated. As I share in the preface to my second book: "My desire with this book is to close the circle that began with the one I published earlier. If for some reason, some of its content could have been lent to misinterpret the purely non-dual teaching of the Course, in this book it will be rectified."

I also feel that in future talks, the language of A Course in Miracles will be replaced by concepts with which the general public can relate, free of any conflict that a Judeo-Christian language could generate in some people, pointing in the same direction (Truth) that point the words and concepts originated by non-dual philosophies. In an excerpt from the book titled, Conscience Speak by Ramesh Balsekar, he says: "When the understanding happens, it makes no difference which words are used or which master has used them. Each master has used different words for only one reason: his audience has been different, the circumstances different, the people different and the times different."

Therefore, if "you" and "I" happen to meet, that will be the encounter that the Holy Spirit, or using Adviata's language, Consciousness has orchestrated to remind Itself that there is no separate individual. Only God.